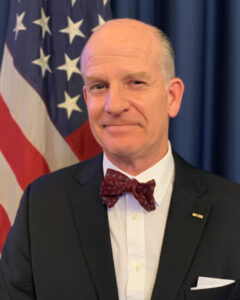 Acting Deputy Chief of Mission at the U.S. Embassy to the Holy See

Thomas A. O’Keeffe III was named Acting Deputy Chief of Mission, U.S. Embassy to the Holy See, in May 2021, having served as Chief for Political and Economic Affairs since July 2020.

As deputy counselor for economic affairs at U.S. Embassy Islamabad from 2018 to 2019, Mr. O’Keeffe focused on macroeconomic stabilization, expansion of environment, energy and trade ties, and countering terror finance. From 2016 to 2018 he advanced reform efforts and accession negotiations for the Organization for Economic Development and Cooperation (OECD) at the Bureau of Economic and Business Affairs. He expanded multilateral engagement as deputy director for partnerships, strategy and communications in the Bureau of Conflict Stabilization Operations from 2014-2016, and served as special assistant to the Under Secretary for Civilian Security, Democracy and Human Rights from 2013-2015. During the 2008 financial crisis, he was assigned as an international economist to the U.S. Treasury Department to analyze European economies. Other diplomatic assignments centered on European Union and German economic affairs and intellectual property protection. He served as a political officer in The Hague and as a vice consul in Bogota.  Prior to joining the Department of State, Mr. O’Keeffe served as a special assistant at the U.S. Office of Management and Budget and as a health communications expert at the Environmental Protection Agency. He also worked as news reporter and as a staffer in the U.S. Congress and the Connecticut General Assembly.

Emily Zeeberg joined the U.S. Embassy to the Holy See as Public Affairs Officer in June 2021.  Previously, she served as Press Attaché at U.S. Embassy Phnom Penh, Staff Assistant to Ambassador Bill Hagerty at U.S. Embassy Tokyo, and a Consular officer at U.S. Embassy Moscow.  Prior to joining the State Department, she was a reporter and editor for several outlets in New York City, including eight years with The Associated Press.  Emily was also a Peace Corps volunteer in Kazakhstan from 2000-2003.  She has a bachelor’s degree in Anthropology from Oberlin College and a master’s degree in Journalism from Boston University.  Her husband Amos is a science journalist, and together they have three school-age children and two Cambodian street cats.