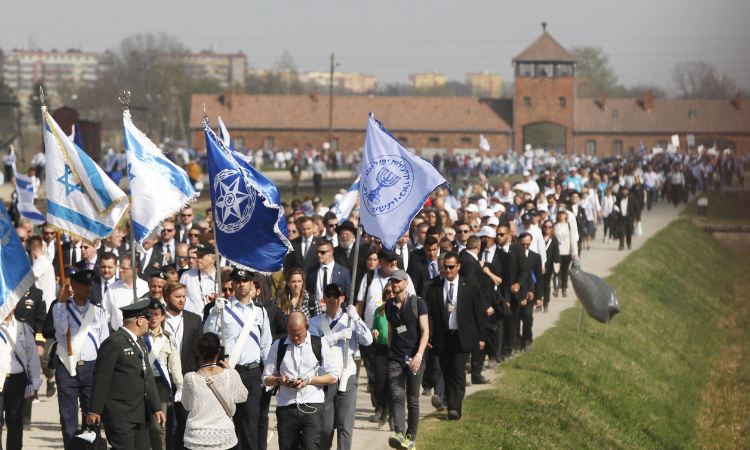 On May 2 in Krakow, Poland, eight U.S. government officials will come together to lead, for the first time ever, an official delegation to the annual March of the Living at the Auschwitz-Birkenau concentration camps.  The three co-chairs of this delegation are U.S. Ambassadors to Poland, Georgette Mosbacher; to Israel David Friedman; and to Germany Richard Grenell.  This initiative, spearheaded by the three co-chairs, illustrates the U.S. government’s tireless efforts to combat anti-Semitism wherever this ugly scourge may appear.  Thousands of students from around the world, including almost 6,000 from the U.S. alone, will participate in the march and will learn firsthand the commitment that the U.S. government brings to the task of countering anti-Semitism.

Ambassador Friedman said: “Anti-Semitism is one of the oldest forms of hate on this planet.  It’s taken many shapes and sizes — the worst of it being here at Auschwitz-Birkenau — and the world can never rest even in this modern day and age in our fight against it.  The U.S. government is always ready to do battle against anti-Semitism and those who peddle this vile hatred, wherever it may exist – whether at book fairs in Europe and the Middle East where you can still find copies of the “Protocols of the Elders of Zion” and “Mein Kampf’; online where hate forums still flourish; or with people such as the shooter in Pittsburgh or most recently, the shooter at a Chabad synagogue in Poway, CA, who still seek to perpetrate violent acts against Jewish people merely because of their faith.  We won’t stop and we won’t rest until we can shine the light in these dark corners and root it out forever.  The most important thing we can do is continue to educate our young people, and help them understand why this hate is so hurtful and painful to so many people around the world.  That is why we think it’s so important to have these U.S. ambassadors marching with students on May 2, in solidarity and in example to them.  We can’t make everyone love one another, but we can try to get people to understand our differences just a little bit more, since so much of this hate is bred from ignorance and misunderstanding.”

The rest of the delegation includes U.S. Ambassadors from Spain (Duke Buchan III), the Holy See (Callista Gingrich), and Switzerland (Edward McMullen, Jr.); as well as the Special Envoy to Monitor and Combat Anti-Semitism Elan Carr; and the Chairman of the U.S. Commission for the Preservation of America’s Heritage Abroad Paul Packer.

Ambassador Grenell added that,“After the synagogue massacre in Pittsburgh last year, the President said, ‘It will require all of us working together to extract the hateful poison of anti-Semitism from the world.’ The U.S. delegation to the March of the Living reflects that commitment. Our presence bears witness to the fact that anti-Semitism is not a relic of the past, but an evolving and continuing threat to democracy, freedom, and the Jewish people. We remain committed not only to the memory of the Holocaust in Europe, but to combating anti-Semitism in Europe, the Middle East, and the United States today.”

Ambassador Mosbacher stated, “U.S. engagement in the March of the Living reflects a commitment to the legacy of Holocaust survivors and to Jewish life around the world.  The United States will always be committed to the post-Holocaust imperative, “Never Again.”  We bear the responsibility to examine the lessons of the past and to ensure that the atrocities, which occurred during this exceptionally dark period in history, never befall us again.  This assembly is a public declaration of the United States’ stand against anti-Semitism. In response to escalating anti-Semitic incidents at home and abroad, this delegation demonstrates that the United States will not stand for discrimination, threats or violent acts against the Jewish people.  A diverse, tolerant and inclusive society is the fabric of our nation and the foundation of the global community we strive to build, based on shared values, open dialogue, and mutual respect.”