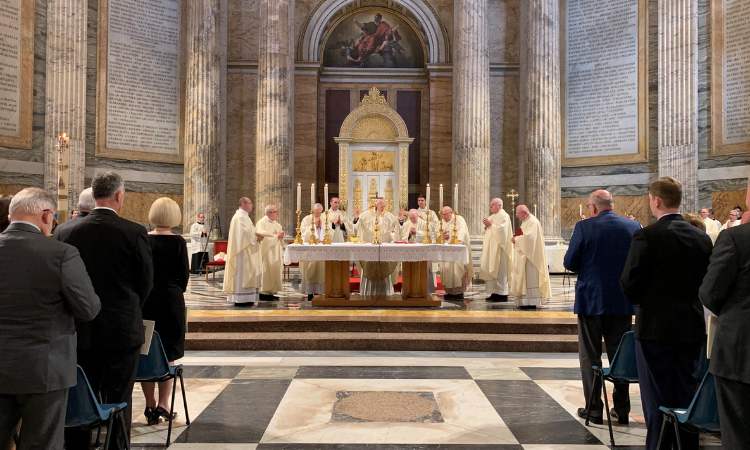 On Tuesday evening, 7 May, Cardinal James Harvey, Archpriest of the Basilica of Saint Paul Outside-the-Walls, celebrated Holy Mass to commemorate the 35th anniversary of diplomatic relations between the Holy See and the United States of America. He was joined by Cardinal William Joseph Levada, Prefect emeritus of the Congregation for the Doctrine of the Faith, Cardinal Edwin O’Brien, Grand Master of the Order of the Holy Sepulchre and Cardinal Sean O’Malley, Archbishop of Boston, along with priests from Rome and from the United States. The homily was delivered by Cardinal Donald Wuerl, Apostolic Administrator of Washington, and the Mass was attended by numerous Ambassadors accredited to the Holy See. The following is the text of Cardinal Wuerl’s homily.

Dear brothers and sisters in Christ,

This Mass in celebration of 35 years of diplomatic relations between the United States and the Holy See takes place as the Church continues with exaltation to rejoice in the Resurrection of Jesus from the dead.

It is precisely the readings for the Masses from Easter on through today that set the focus for our recognition of the importance of this Church / State relationship, these United States / Holy See diplomatic relations.
We have been reading from the Acts of the Apostles and, over and over again, we hear the word “witness.”

Before Jesus returned to his Father he reminded all of those hearing him that “You will be my witnesses” (Acts 1:8). To the Apostles he conferred a special challenge and we hear about it in the first reading from the Acts of the Apostles today, “We are witnesses of all that he did” (Acts 10:39).

It falls to every disciple to bear witness to Jesus. But that witness is borne out in a variety of different ways.

Each of us according to our role in life must find a way to bear witness to all that Jesus proclaimed, His kingdom, our human solidarity, his gift of a new creation.

While the manifestation of the kingdom is our common heritage, how we do so will be conditioned by our specific mission seen in all its circumstances.

In the second reading today from the Letter of Saint Paul to the Ephesians, he identifies himself as an ambassador of the Kingdom, even though he exercises the embassy in chains.

The missionary Apostle Paul calls himself an ambassador because it is the task of this office to carry the voice and message of the one he or she represents to others who need to hear that message. Indeed, the very word “apostle,” from the Greek apostolos, means “emissary” and, having been sent by Jesus, they are “ambassadors of his kingdom of grace and new life” (CCC 858-59).

Saint Paul spoke on behalf of the realities of that spiritual kingdom. He announced the signs of the kingdom: love, justice, peace, patience, reconciliation, goodness, and joy (Gal 5:22). Today, we celebrate another expression of the mission of witness to the need to bring people together around those same realities: love, justice, peace, reconciliation and goodness.

Now, however, both in the Church’s social teaching and in the United States declaration of political purpose we can find common ground, often expressed in words like human development, social justice and care of creation.

Whole chapters of the Vatican Council’s Pastoral Constitution on the Church in the Modern World Gaudium et Spes (1965), as well as papal encyclicals such as Sollicitudo Rei Socialis (1987), Familiaris Consortium (1981), Centesimus Annus (1991), Deus Caritas Est (2005) and Laudato Si (2015) provide a vision of human development and spiritual growth expressed in language accessible to all parties in a diplomatic and political engagement. As Pope Paul VI once so memorably declared: “if you want peace works for justice.”

The diplomatic mission to represent the United States to the Holy See carries with it the goal of sharing in a common effort to accomplish a truly good and just society on the international level. This involves the steps and conversations that build up the possible ways to achieve this goal.

For some the vision is identified in our own founding documents. “We hold these truths” that we are endowed with “the inalienable rights to life, liberty and the pursuit of happiness.” For others the same challenge is articulated in the opening of the book of Genesis where we are defined as “made in the image and likeness of God.”

In forming this bi-lateral relationship 35 years ago, the United States joined an entire community of nations who have established diplomatic relations with the Holy See – more than 180 countries today, as well as the Holy See’s mission to the United Nations. Since medieval times, papal representatives have been sent to states and those governments in turn have sent their representatives to the Holy See. During this time, the Holy See has on many occasions offered its good offices in seeking the resolution of international disputes.

At the heart of this diplomatic relationship is the recognition of the need to work to establish a truly good and just world community. In his address to the Members of the Diplomatic Corps accredited to the Holy See in January 2019, our Holy Father, Pope Francis, affirmed that, “an essential aspect of good politics is the pursuit of the common good of all, insofar as it is the good of all people and of the whole person and a condition of society that enables all individuals and the community as a whole to achieve their proper material and spiritual well-being.”

We are social beings. We do not live in isolation and neither do nations. Community with others not only helps us secure such fundamental goods as human development and life itself, but it is itself a basic element in our wellbeing and fulfillment as persons and as nations.

Each of our lives are deeply affected by the society in which we live. Each nation, therefore, has a duty to share in the task of shaping and conserving a just and humane social order.

Today, we recognize just how increasingly small our world community has become. Instantaneous communications, rapid transportation, and a host of economic and cultural ties today bind evermore closely all the citizens and people of the world (cf. GS 84). The international community needs all the more to be bound together by the pursuit of a common good. Here, too, an ambassador can be a constant and convincing witness that basic human goods are common goods and that they pervade all of human life.

In an address to a previous U.S. ambassador to the Holy See on October 2, 2009, our Holy Father, Pope Benedict XVI, stated that, “Genuine progress, as the Church’s social teaching insists, must be integral and humane; it cannot prescind from the truth about human beings and must always be directed to their authentic good.”

Today, Ambassador Callista Gingrich represents the efforts of the United States to engage with the Holy See in the perennial effort to build on the international scene a truly good and just society. She personifies the continuation of that personal tie that has been manifested in each ambassador since President Ronald Reagan established full diplomatic relations with the Vatican in 1984.

Over the years, we have watched the impact of that relationship in a wide range of activities usually associated with the works of the common good, peace, reconciliation, human prosperity and social justice.

Ambassador Gingrich, through her presence and faith, reminds all of us that no small part of America includes its longstanding religious tradition, its faith values and its commitment not only to love God but to love one another.
In fact we take great pride in our motto, “In God we trust”, and declare ourselves one nation under God with liberty and justice for all.

Our celebration today recognizes as we hear in today’s Gospel “the kingdom of God is at hand” (Luke 10:9). As witnesses, we must do our part individually and professionally to help realize it – as best we can.

The fullness of God’s kingdom will only come at the end of time in glory. Yet, we can rejoice that the 35 years of diplomatic relations between the United States and the Holy See have helped advance some of the elements of that kingdom here and now.