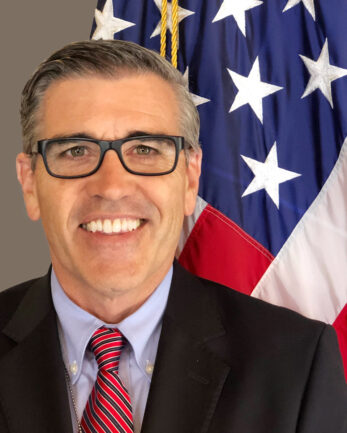 Patrick Connell
Deputy Chief of Mission at the U.S. Embassy to the Holy See

Patrick Connell is a career member of the United States Foreign Service.  He began serving as Deputy Chief of Mission at the U.S. Embassy to the Holy See in July 2020.  Prior to arriving at the Vatican, Mr. Connell led a team of diplomats, USAID officers, and U.S. Army Special Operations Forces providing stabilization and humanitarian aid in Northeast Syria as the Forward Leader of the Syria Transition Assistance Response Team, aimed at securing the enduring defeat of ISIS.

A native of Westford, Massachusetts, Mr. Connell holds a Bachelor of Arts in Religious Studies and English from Villanova University and a Juris Doctor from Villanova University School of Law.  He has studied Italian, Greek, Albanian, and Turkish, and is the recipient of several State Department Superior and Meritorious Honor awards and the 2015 Sinclaire Language Award for both Greek and Turkish. In 2020 he was selected as the runner up for the Ryan Crocker Award for Outstanding Leadership in Expeditionary Diplomacy.  He is joined by his wife, Hyrije Kryeziu Connell.