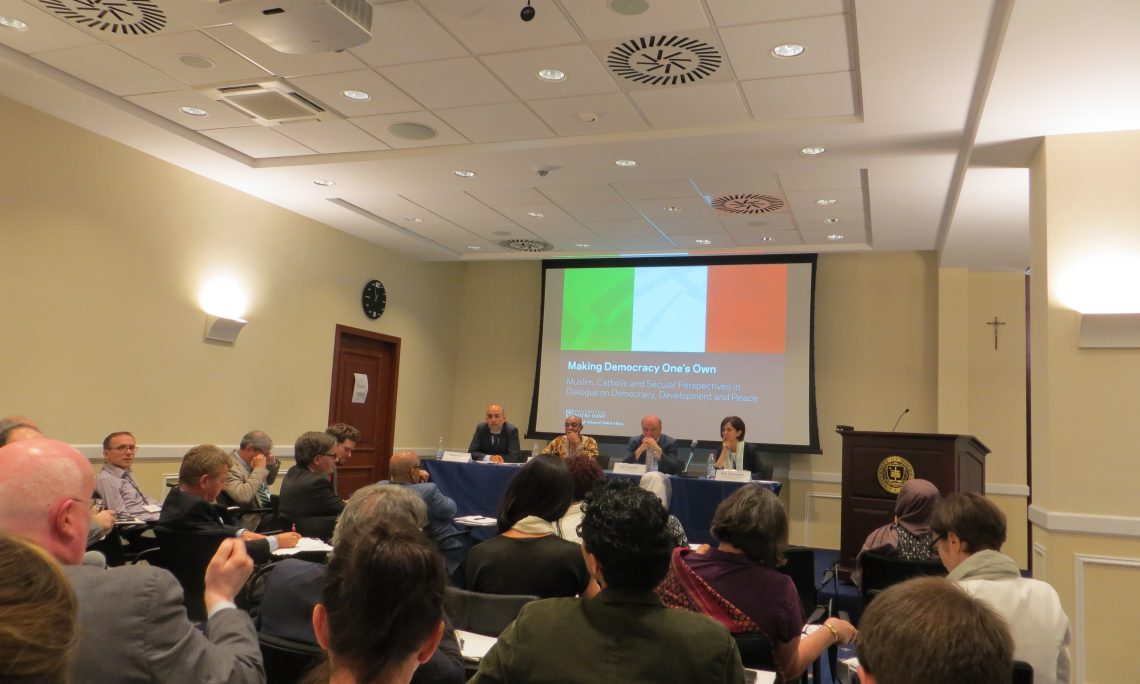 On May 30 and 31, 2016, U.S. Ambassador to the Holy See, Ken Hackett, and U.S. Special Representative for Religion and Global Affairs, Shaun Casey, spoke at “Making Democracy One’s Own,” a conference that was co-hosted by the University of Notre Dame, John Cabot University, the Italian Ministry of Foreign Affairs and the Sophia University Institute, among others, and supported by the U.S. Embassy to the Holy See’s small grants program. It brought together scholars, policy-makers, practitioners and theologians to explore the links between contemporary, religiously rooted projects of democracy, interreligious dialogue and foreign policies aimed at countering religious extremism. Keynote speakers included Scott Appleby of the University of Notre Dame, Graeme Wood of the Atlantic Monthly, Katherine Marshall of Georgetown University and the World Bank, Asef Bayat of the University of Chicago, Amer al-Hafi from Jordan’s Royal Institute for Interfaith Studies, and Khalid Chaouki of the Italian Parliament. Subtitled “Muslim, Catholic and Secular Perspectives in Dialogue on Democracy, Development and Peace,” the conference also discussed gender issues, women’s rights, and the intricacies of Islamic studies.

Two dynamic public roundtable sessions were held on the first two nights of the conference which drew in a large audience of foreign policy makers, scholars, students, and interfaith practitioners from across the city of Rome.  Following a public session on contemporary practices of Muslim-Catholic-Secular dialogue on Monday evening, Tuesday night’s public session was at the Italian Senate, hosted by the chairman of the Italian Senate’s Foreign Relations committee, the honorable Pier Fierdinando Casini. Shaun Casey gave a landmark speech to open the evening’s conversation in which he explained the institution of his office and the role it has played in engaging religious communities abroad and countering religious expressions of violent extremism over the last 5 years.

The introductory session on Monday, May 30, began at Notre Dame’s Global Gateway with a presentation by the Director of the Kroc Institute for International Peace Studies at Notre Dame, Scott Appleby, focusing on interreligious dialogue and defining specific terminology for the conference. The keynote speaker for this session, Jan-Werner Müller from the University of Princeton, examined the intersections between democracy and Catholicism, and underscored the difficulties in drawing parallels between early modern Catholicism and Islam in relation to evolving democracies. Other presentations during Monday’s closed sessions included one from Imam Rashied Omar, who also teaches at Notre Dame, one by Asaf Bayat from the University of Illinois, and another by Mona Siddiqui from the University of Edinburgh. The topics ranged from patriarchy and violence against women to the difference between Islamism and Post-Islamism to Muslim identity and its complex connections to “Western” values.

The Tuesday morning sessions allowed for scholars to present work that centered on the intricate relationship between religion and socio-political/economic development. The first one, entitled “Foundations for Democracy in Catholic and Islamic Traditions”, included Armina Omerika, a German professor of Islamic theology and Bosnian refugee whose work examined the struggle against injustice and oppression in relation to the Quran and the centrality of its juridical discourse; Agostino Giovangnoli, from the Catholic University in Milan and a member of Sant’Egidio, who spoke about the shift in democracy from its emphasis on elections to the focus on tolerance and integration of minority groups; Armando Salvatore, from McGill University, whose research examined a little-known tale detailing the ban of religion in public which implied the end of interreligious dialogue.

During the second session under the title “Human Development and Interreligious Engagement,” Katherine Marshall of the World Bank and Georgetown University spoke about religion in relation to politics and the development of interfaith activities; Wolfgang Palaver, a Jesuit professor of Catholic Social Teaching at the University of Innsbruck, discussed Evangelii Gaudium to criticize an economic model of liberal democracy in which religion could be a partner in civil society, holding the state accountable; and Emma Tomalin, director of the Center of Religion and Public Life at Leeds University in the UK, argued that religion is being used to meet secular development goals which can often come into conflict.

The following panel that day, entitled “Peacebuilding Potential of Catholic-Muslim Dialogue” was chaired by British Ambassador to the Holy See, Nigel Baker. During this panel, Patrice Brodeur outlined the work of KAICIID and their strategic plan involving Catholic-Muslim dialogue for 2016-2018; Amer al Hafi, Professor of theology from the Royal Institute for Inter-Faith Studies in Jordan, emphasized the understanding of sacred texts in relation to societal dialogues; and Zilka Spahic-Siljak, scholar from the University of Sarajevo, stressed the importance of motherhood in a discussion of women peacebuilders in the Bosnian conflict who defended the lives of others as their own.

The last one of the closed sessions on Tuesday afternoon, entitled “The Refugee Crisis in the Middle East: Embedding Interreligious Collaboration in Foreign Policy,” was moderated by Ambassador Hackett, the U.S. Ambassador to the Holy See. Presentations covered a range of topics: Scott Thomas, an American who teaches at the University of Bath in the UK, connected the refugee crisis with common misperceptions about various conflict zones in the Middle East; and Pasquale Ferrara, the former director of the European University Institute, and Mauro Garofalo from Comunità Sant’Egidio, both spoke about the “Corridoi Umanitari” initiative, that will fly a total of 1,500 vulnerable refugees directly from Syria, Ethiopia, and Morocco to Italy.