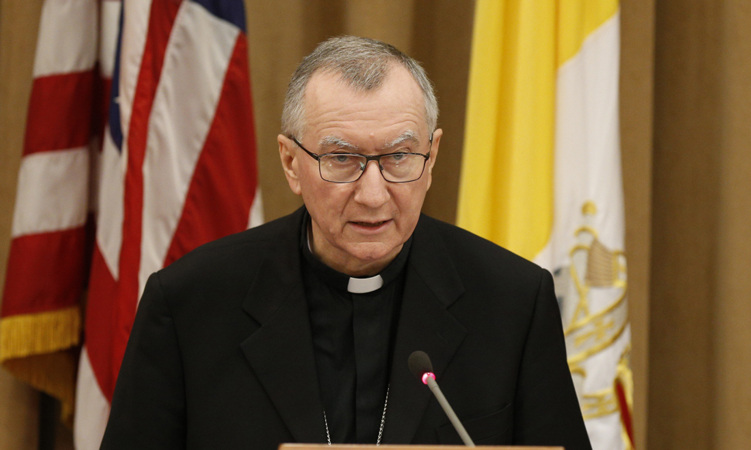 Closing Remarks of His Eminence Pietro Cardinal Parolin Secretary of State of His Holiness on Defending International Religious Freedom: Partnership and Action

I am grateful for the kind invitation to offer the Closing Remarks at today’s Symposium on the theme: “Defending International Religious Freedom: Partnership and Action”. In particular, I would like to thank the organizers of this significant gathering, specifically the Embassy of the United States of America to the Holy See and its partners for this event: the Pontifical Foundation Aid to the Church in Need and the Community of Sant’Egidio. In a special way, I wish to extend my heartfelt gratitude to the victims who shared testimony of their experiences of persecution and the denial of their ability to exercise the right of religious freedom, as well as to the speakers who gave substantial contributions during the panels.

During his visit to the United States of America in September 2015, Pope Francis, in his speech at Independence Hall, recalled how the Declaration of Independence acknowledges that all men and women are created equal, that they are endowed by their Creator with certain inalienable rights, and that governments exist to protect and defend those rights.[1] This fundamental principle is echoed in the International Religious Freedom (IRF) Act, passed by the United States of America’s Congress and signed into law by President Clinton on October 27, 1998. This bipartisan legislation highlighted the importance of promoting international religious freedom as a key aspect of America’s foreign policy.

Such a commitment is very important in our time because, quite regrettably, religious persecution continues to grow tremendously. In his address to the Diplomatic Corps, in January of this year, Pope Francis asserted: “It is well-known that the right to religious freedom is often disregarded, and not infrequently religion becomes either an occasion for the ideological justification of new forms of extremism, or a pretext for the social marginalization of believers, if not their downright persecution.”[2]

In the midst of the many situations which challenge the right to freedom of religion and conscience, the Catholic Church encourages all people of good will to continue to raise awareness in order to allow members of various religious communities to enjoy freedom of religion fully and to profess freely and publicly their faith in every part of the world. To achieve such a goal, governments, religious leaders, international organizations and members of civil society need to cooperate in close partnership and in close collaboration with the international community, to undertake actions and initiatives which acknowledge that the promotion and protection of the freedom of religion is not a “preference” for one or another religious group, but a recognition of the equal dignity of every human person, the violation of whose fundamental rights constitutes a grave abuse.

I noted with great interest that the Agenda of this Symposium includes personal testimonies from two victims, one a Yazidi community member and the other a Rohingya community member. Pope Francis has shown closeness to both minority groups, and has expressed concern about the violence they are enduring. During his meeting with a Yazidi community living in Germany he deplored how the rich spirituality and culture of the Yazidi community has sadly been marked by unspeakable violations of fundamental human rights: kidnapping, slavery, torture, forced conversion and killings. Yazidi sanctuaries and places of worship have been destroyed.[3] In the same way, during his Apostolic Journey to Myanmar and Bangladesh, Pope Francis met a group of Rohingya refugees in Bangladesh and assured them of his closeness, recognizing that: “There is little that we can do because their tragedy is so great”. He invited every human being to open their hearts and to “continue to work actively for the recognition of their rights”. At the same time, he appealed to the empathy of the Rohingya community members so that they might “grant us the forgiveness we seek.”[4]

The Holy See does not tire of intervening to denounce these situations, requesting recognition, protection and respect; not only in favor of Christians but for all religious and ethnic groups that suffer discrimination and persecution. At the same time, it calls for dialogue and reconciliation to heal every wound. Promoting religious freedom through dialogue is the title of the second panel of today’s Symposium. Three key points were underlined: to build religious unity, to promote harmony and to develop a mediation approach. In this regard: “It is a particularly gratifying sign of our times that believers and all people of good will feel increasingly called to cooperate in shaping a culture of encounter, dialogue and cooperation in the service of our human family.  This entails more than mere tolerance. It challenges us to reach out to others in mutual trust and understanding, and so to build a unity that sees diversity not as a threat, but as a potential source of enrichment and growth.  It challenges us to cultivate an openness of heart that views others as an avenue, not a barrier.”[5] It is vital to build trust and collaboration between religious leaders and communities and it is necessary to build harmony between religious and ethnic groups. However, this will only be possible if leaders make decisions of peace and for peace. There will be no peace without the proper education of coming generations. Nor can young people today be properly educated unless the training they receive corresponds to the nature of man as an open and relational being.[6]

Coming together to build unity, to cultivate harmony and develop a mediation approach, government, religious leaders, civil society and international organizations should clearly attest that no violence in the name of religion is acceptable. This was one of the core messages of Pope Francis at the Al-Azhar Conference Centre, Cairo, on Friday, 28 April 2017: “As religious leaders, we are called to unmask the violence that masquerades as purported sanctity and is based more on the ‘absolutizing’ of selfishness than on authentic openness to the Absolute (…) Together (…) let us say once more a firm and clear ‘No!’ to every form of violence, vengeance and hatred carried out in the name of religion or in the name of God. Together let us affirm the incompatibility of violence and faith, belief and hatred. Together let us declare the sacredness of every human life against every form of violence, whether physical, social, educational or psychological.”[7]

Before concluding, I would like to offer an observation about the first panel of the Symposium that focused on “Advancing Religious Minorities’ Rights in the Middle East”.

The death, devastation and destruction caused by the ongoing conflict that we have witnessed in recent years threatens the very survival of religious minorities in the Middle East, a place that once enjoyed the peaceful coexistence of peoples with diverse religious and ethnic identities. Extremist ideologies have threatened, and continue to threaten, the very landscape of the region by eradicating Christians and other minorities who remain an intrinsic part of its identity. Indeed, as Pope Benedict XVI indicates in Ecclesia in Medio Oriente, “a Middle East without Christians, or with only a few Christians, would no longer be the Middle East, since Christians, together with other believers, are part of the distinctive identity of the region.”[8]

To conclude my remarks, I would like to underline seven essential elements, which, according to the Holy See, may contribute to protect effectively religious minorities:

First, there is an urgency to overcome any and all political indifference: Those who are entrusted with safeguarding respect for fundamental human rights must fulfil their responsibility to protect those in danger of suffering atrocious crimes. We must raise public sensitivity to the realities of many humanitarian emergencies and work to provide and ensure that the essential social, political and economic conditions are securely arranged to facilitate the return of religious and ethnic minorities to their places of origin, which is essential for peaceful coexistence.

Second, there must be full respect for the rule of law and equality before the law based on the principle of citizenship, regardless of one’s religion, race or ethnicity. The law must equally and unequivocally guarantee every citizen’s human rights, among which is the right to freedom of religion and conscience. Even in places where one religion is granted special constitutional status, the right of all citizens and religious communities to freedom of religion must be equally recognized and defended.

Third, while showing mutual respect for their respective autonomies, there must be a positive collaboration between religious communities and the State. Although independent, both entities are devoted to the wellbeing of the human person who is both religious and a citizen. The greater cooperation between them will result in a more effective service for the good of all.[9]

Fourth, all religious leaders have a grave duty to condemn the abuse of religious belief and sentiment to justify terrorism and to affirm that no one can take innocent life in God’s name.

Fifth, an effective interreligious dialogue is necessary to move beyond the pessimistic assumption that conflicts among religious believers are inevitable.  Such a dialogue should also seek to address those narrow-minded interpretations of religious texts that demonize or dehumanize those of different beliefs.

Sixth, a good education in general and a solid religious education in particular are key in preventing the radicalization that leads to extremism. Through a good education, future generations can be raised with a well-founded hope that mutual respect and peaceful co-existence with others of different religious creeds is possible.

Seventh and lastly, there must be a definitive and guaranteed end to the flow of money and weapons destined to those intending to use them to target religious minorities. Stopping atrocities not only involves addressing the hatred and cancers of the heart that spawn violence but also removing the instruments by which that hatred actually carries out that violence. As Pope Francis has remarked: “An end must be put to the proliferation of arms; if they are produced and sold, sooner or later they will be used.”[10]

In closing, I wish to reiterate my gratitude for the invitation to take part in this Symposium and to underscore the support of the Holy See in any, and all, efforts dedicated to promoting and to protecting the exercise the fundamental human right of the freedom of religion. A month from now, Secretary of State Mike Pompeo will host in Washington a Ministerial Conference to Advance Religious Freedom. Considering the challenges of the current situation, I cannot but hope that all these efforts will lead to alleviate the suffering of all those affected by discrimination, persecution and even martyrdom because of their religious affiliation or ethnicity.  Through efforts such as these, there remains the hope that we might be able to establish a foundation for a peaceful world where people of different religions and ethnic origins may live together in peace and harmony.

[4] Pope Francis, Remarks of the Holy Father to the Group of Rohingya Refugees, Dhaka, 1 December 2017.