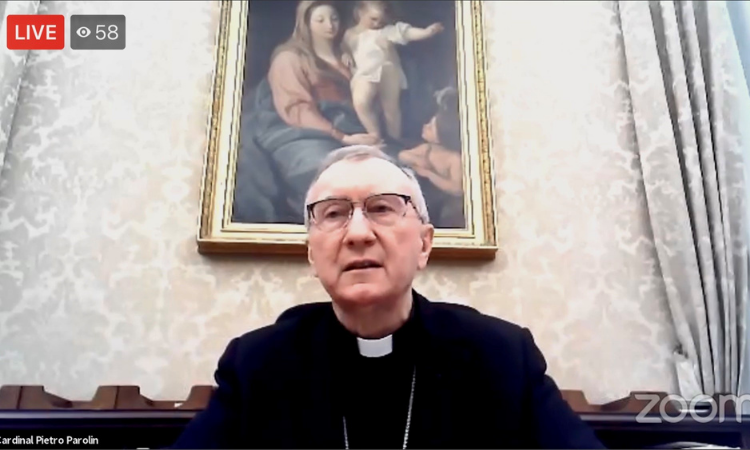 I wish to thank Her Excellency, Ambassador Callista Gingrich, for the kind invitation to this virtual symposium entitled “Never Again: Confronting the Global Rise of Anti-Semitism”, organized by the Embassy of the United States of America to the Holy See, and, indeed, it is a pleasure for me to offer these closing remarks.

In recent years, we have witnessed the spread of a climate of evil and antagonism, in which anti-Semitic hatred has been manifested through a number of attacks in various countries. The Holy See condemns all forms of anti-Semitism, recalling that such acts are neither Christian nor human.

Last year, during a General Audience, Pope Francis added a spontaneous comment in a very clear and loud voice: “The Jews are our brothers! And they should not be persecuted. Understood?” (Pope Francis, General Audience, 13 November 2019). Furthermore, the Holy Father has stressed many times that for a Christian any form of anti-Semitism is a rejection of one’s own Christian origins and, thus, a complete contradiction.

Indeed, Jews are our brothers and sisters and we are proud of having them as such. We share a rich spiritual patrimony that must be always respected and appreciated. We are growing in mutual understanding, fraternity and shared commitments, and this is the way to move forward.

Unequivocally condemning any form of anti-Semitism is a fundamental aspect to confronting the problem and it does, in fact, help in combatting it. However, we must ask ourselves if it is enough to condemn it or if other considerations and measures are required.

The re-emergence of hate against Jews, along with other forms of persecution against Christians and Muslims and members of other religions, needs to be analysed at its roots. After more than 75 years of the liberation of the Auschwitz-Birkenau concentration camp, how is it possible that some people are still hating and persecuting other human beings?

In the Encyclical Letter Fratelli tutti, His Holiness Pope Francis has offered a number of considerations and tangible ways on how to build a more just and fraternal world, in social life, politics and institutions. The Document also reflects – among other topics – on the distortions of many fundamental concepts such as democracy, freedom, justice, selfishness, indifference, and the loss of the meaning of the sense of history. Another matter of concern is the phenomenon of the “throwaway culture”, which “finds expression in vicious attitudes that we thought long past, such as racism, which retreats underground only to keep re-emerging. Instances of racism continue to shame us, for they show that our supposed social progress is not as real or definitive as we think” (n. 20).

The Pontiff goes on to describe a number of “dark clouds”, in which we can easily find some of the reasons for the rise of anti-Semitism.

One of them, the “loss of the meaning of history”, has a clear influence on how people see anti-Semitism.

In fact, in order to overcome so many deplorable forms of hate, we need the “capacity to involve ourselves together in remembering. Memory is the key to accessing the future, and it is our responsibility to hand it on in a dignified way to young generations” (Pope Francis, To the international conference on the responsibility to fight anti-Semitic hate crimes, 28 January 2018).

Of course, it is not only a matter of remembering or studying the past, but we need a living and faithful common memory, that should not remain imprisoned in resentment, but should open up with courage toward a new dawn.

In 2016, His Holiness went to Auschwitz-Birkenau to pray in silence and to reflect. Of course, we all find it emotionally difficult to pause and to listen in silence to the plea of suffering humanity. However “silence, helps to keep memory alive. If we lose our memory, we destroy our future. May the anniversary of the unspeakable cruelty that humanity learned of seventy-five years ago serve as a summons to pause, to be still and to remember […]. Let us too remember the past and have compassion on those who suffer, and in this way till the soil of fraternity”. (Pope Francis, To a delegation of the “Simon Wiesenthal Center”, 20 January 2020).

We all know what fraternity means, the Holy Scriptures are replete with this teaching:  “love your neighbour as yourself” (Lev 19:18), because “Those who do not love a brother or sister whom they have seen, cannot love God whom they have not seen” (1 Jn 4:20).

In this context, it is particularly interesting to consider what only recently has been found in the Historic Archive of the Section for Relations with States of the Secretariat of State. I would like to share with you one small example that is especially memorable for the Catholic Church.

On 9 February 1916, my predecessor, Secretary of State Cardinal Pietro Gasparri, wrote a letter to the American Jewish Committee of New York, where he states: “The Supreme Pontiff […], head of the Catholic Church, which – faithful to its divine doctrine and to its most glorious traditions – considers all men as brethren and teaches to love one another, he will not cease to inculcate the observance among individuals, as among nations, of the principles of natural right, and to reprove any violation of them. This right should be observed and respected in relation to the children of Israel as it should be as for all men, for it would not conform to justice and to religion itself to derogate there from solely because of a difference of religious faith”.

Cardinal Gasparri’s letter was a response to the one sent to the Holy See on 30 December 1915 by the American Jewish Committee, urging Pope Benedict XV for an official intervention on behalf of the horror, cruelties and hardships visited upon the Jews in the belligerent countries since the outbreak of World War I.

In the American Hebrew and Jewish Messenger, the Committee welcomed the answer saying that it “is virtually an encyclical”, and “Among all the papal bulls ever issued with regard to Jews throughout the history of the Vatican, there is no statement that equals this direct, unmistakable plea for equality for the Jews, and against prejudice upon religious grounds. […] It is gratifying that so powerful a voice, so influential a force, particularly in the regions where the Jewish tragedy is now being enacted, has been raised, calling for equality and for the law of love. It is bound to have a far-reaching, beneficent effect.”

These documents, fully available for consultation, are a small example – just a little drop into an ocean of murky waters – showing how there is no basis for discriminating someone because of faith.

The Holy See considers that, along with a living memory of what happened in the past, interreligious dialogue is an indispensable tool to combat anti-Semitism. It has the aim to promote a commitment to peace, mutual respect, the protection of life, religious freedom, and the care of creation.

In fact, “the different religions, based on their respect for each human person as a creature called to be a child of God, contribute significantly to building fraternity and defending justice in society. Dialogue between the followers of different religions does not take place simply for the sake of diplomacy, consideration or tolerance” (Pope Francis, Fratelli Tutti, 271).

It is my hope that the more Christians and Jews grow in fraternity, social friendship and dialogue, the less anti-Semitism will be possible, because “deceit is in the mind of those who plan evil, but those who counsel peace have joy” (Prov 12:20). Shalom!