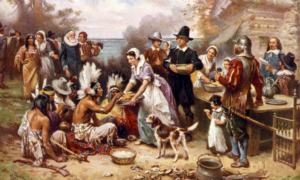 As we celebrate Thanksgiving, we remember the courageous Pilgrims who sailed across the ocean to Plymouth, Massachusetts in 1620 to flee religious persecution and to seek freedom and opportunity in the New World.

In their determination to succeed, they had little more than their own courage, faith, resourcefulness, and support of Native American friends.

After surviving a challenging winter, the Pilgrims and Native Americans gathered in October 1621 to feast for 3 days and give thanks to God.  They could not have imagined that their display of gratitude would become a great American tradition.

In 1789, President George Washington issued a proclamation declaring the first national day of Thanksgiving.  Washington called upon the people of the United States to thank God “for His kind care and protection of the people of this country.”

However, it was a woman, Sarah Josepha Hale, whose persistent campaign made Thanksgiving a national holiday.  For seventeen years Sarah sent hundreds of letters to presidents and other politicians, imploring them to institute a national holiday.

Sarah Josepha Hale became one of the most influential women in the United States as the editor of the most widely circulated women’s magazine of the time called Godey’s Lady’s Book.  She also penned “Mary Had a Little Lamb,” one of the most-well-known poems in American history.

In 1863, Abraham Lincoln received a letter from Sarah in the midst of the Civil War.  “If every state would join in Thanksgiving,” she wrote, “Would it not be a renewed pledge of love and loyalty to the Constitution?”

President Lincoln agreed.  And ever since, the United States has set aside the last Thursday of November as a day to give thanks for the many blessings and gifts bestowed upon our country.

Again and again, even in our darkest days, our leaders have called upon us to give thanks for our many blessings. This year has been a difficult year for many who have suffered due to the COVID-19 pandemic.

Nevertheless, we are a nation that has always persevered through hardship and we will again.

So, with gratitude, it is fitting that we should reflect upon what is good and what has been given to us. It is in this spirit that Newt and I wish you and your loved ones a safe and happy Thanksgiving.