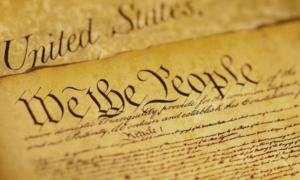 Constitution Day celebrates a key moment in the history of the United States of America.

Two hundred and thirty-three years ago, the Framers of our Constitution met in Philadelphia and set the United States of America on a bold journey that would change the course of history.

Our second president, John Adams, called the drafting of the Constitution, “the greatest single effort of national deliberation that the world has ever seen.”

Since its ratification in 1788, this document has remained the bedrock of the rule of law for our nation.

The drafters of our Constitution were committed to a belief in the United States as a free and prosperous country.

America’s daring and revolutionary experiment in self-governance has, from the start, been a beacon of hope and freedom for people around the world.

President Ronald Reagan once described our Constitution as a covenant made not only with ourselves, but with all of mankind.

As American citizens, we have a solemn duty to meet the challenges enshrined in our Constitution, as we strive to build a more perfect union.

As we celebrate Constitution Day, I encourage you to take a moment to read and reflect upon this consequential document.