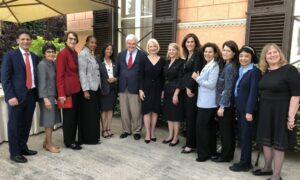 Remarks by Ambassador Callista L. Gingrich at a Reception in honor of the National Association of Women Judges.

Good evening and welcome to Villa Richardson! Thank you for joining us as we honor the National Association of Women Judges.

I would like to thank Judge Ipema for co-hosting tonight’s reception.

For 40 years, the National Association of Women Judges has inspired and led the American judiciary in advancing the rights of women and children, and promoting justice for all.

Through its advocacy and educational programing, the National Association of Women Judges works at the forefront of critical social and legal issues, including one dear to my heart — combatting human trafficking.

As the U.S. Ambassador to the Holy See, I am committed to working with you and our colleagues at the Vatican to eradicate this global scourge.

I am so honored to host your association, not just for your commendable efforts on fighting human trafficking, but also for your efforts to promote and advance the role of women in the American judiciary.

I hope that your participation in the Vatican’s “Pan-American Judges Summit” will help create an international coalition to share best practices and to defend justice around the world.

Your work to establish “collaborative courts” in the United States is one such example. These programs have had a remarkable impact on reducing crime and reforming the criminal justice system.

This issue is a priority for President Trump and his administration. In December 2018, the President signed the First Step Act – the first major reform to our criminal justice system in over a decade.

This is an area where the United States and the Holy See agree. Like President Trump, Pope Francis cares deeply about the conditions of prisoners and their re-entry into society. On Holy Thursday, the Pope celebrated Mass and washed the feet of prisoners at a nearby correctional facility. His message, which he shared at a Philadelphia prison in 2015, was that we must believe in the possibility of rehabilitation.

Beyond criminal justice, our diplomatic relationship with Pope Francis and the Holy See impacts a number of critical global issues, including, religious freedom, human rights, and conflict resolution.

Since 1984, our partnership with the Holy See has been a worldwide force for good.

And U.S. organizations, like the National Association of Women Judges, that engage with the Holy See on issues of justice and human dignity, play a major role in strengthening this enduring legacy.