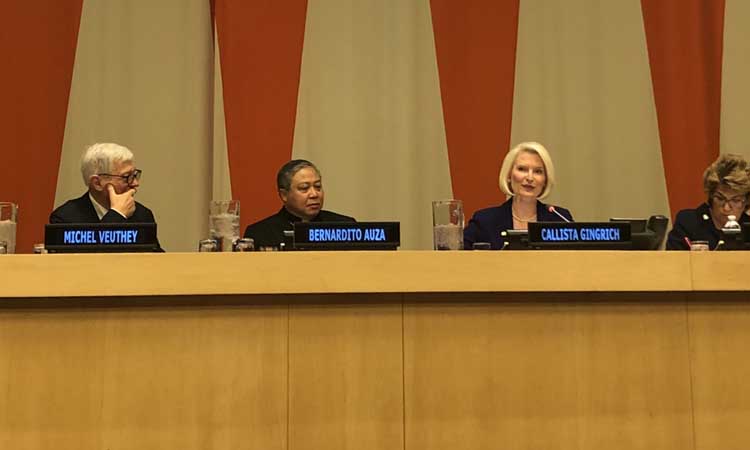 Good morning.  I’d like to thank Ambassador Michel Veuthey and the Sovereign Order of Malta for the opportunity to be with you today.

I would also like to thank His Excellency Archbishop Auza for his thoughtful remarks and his leadership on eradicating human trafficking.  The United States and the Holy See share a common commitment to this endeavor.

As the U.S. Ambassador to the Holy See, I have the honor of working closely with the Vatican and other Catholic partners to end this horrific crime.

Finally, I’d like to acknowledge and thank Kevin Hyland and the Santa Marta Group for their critical work on this issue.  In February, I was privileged to speak to the Santa Marta Group at the Vatican, where law enforcement leaders from around the world joined Catholic clergy to exchange best practices in the fight against modern slavery.  The United States proudly supports the work of the Santa Marta Group to combat this epidemic.

Human trafficking is a horrendous evil and a global crime that deprives millions of their freedom and dignity.

Discussions like this are essential.  It is critical that we come together, as partners and allies, to end this crisis.  No single government, organization, or individual can do it alone.

Human trafficking not only robs a person of their dignity, it compromises national security, threatens international peace, and distorts global markets.

All of us here understand the complexities of the global trafficking crisis.  And in each of our countries and regions, we know what works and what doesn’t.

I’m honored to be here today to talk about practical solutions and recent actions taken by the U.S. Government to eradicate this scourge.

But first, I’d like to share a story with you.  Over the last year I’ve had the pleasure of working with Blessing Okoedion.  Blessing is a lovely and talented Nigerian woman.  She has a degree in computer science and speaks multiple languages.  Blessing was 26 years-old when a recruiter found her through a local church in Nigeria and offered her a job at a computer store in Spain.

Blessing quickly learned that there was no job for her in Spain.  Human traffickers instead sent her to Naples, Italy, where she was forced into prostitution.  Through determination and courage she escaped.  Her perseverance took her to a shelter in Caserta managed by Ursuline nuns.

Today, Blessing is as an activist and a cultural mediator working alongside Catholic nuns to combat modern slavery in Italy and Nigeria.

In June, Secretary of State Mike Pompeo recognized Blessing as a Trafficking in Persons Hero, acknowledging “her extraordinary courage to prevent human trafficking [and] her selfless efforts to lend a helping hand to those still subjected to the crime.”

Blessing is just one example of so many victims of human trafficking.  She escaped.  But sadly, many others have not.  Their stories are far more common than most realize.

It’s estimated that more than 25 million people – the majority of them women and children – are victims of human trafficking.  They are sons and daughters – sisters and brothers – parents and friends.  They live in the most inhumane environments imaginable.

We see 12-year-old Afghan boys forced to fight for Iranian-supported militias in Syria; Rohingya refugees that flee persecution in Burma, only to be exploited by traffickers in refugee camps; and governments that routinely fail to stand up to traffickers and protect victims.

The Trump Administration is committed to ending this global crisis.  On October 11, President Trump convened this administration’s first meeting of the President’s Interagency Task Force to Monitor and Combat Trafficking in Persons.  He vowed that America “will not rest until we have put these vile organizations out of business and rescued every last victim.”

The Trump Administration is fighting human trafficking on all fronts, through vigorous domestic and international efforts.

Under the leadership of Secretary Pompeo, the U.S. Department of State issued the Trafficking in Persons Report, which details efforts in 187 countries and territories to combat human trafficking. This annual report includes input from foreign government officials, international organizations, faith groups, and survivors – making it an example of how the United States is leading a comprehensive, global effort in this fight.

The United States is also the largest donor to the Global Fund to End Modern Slavery, a congressionally-funded program to end human trafficking around the world. The United States has contributed $75 million dollars to this program.

And finally, the Department of State is releasing a new video through our embassies and consulates around the world, to help visa applicants identify trafficking, and to report suspicious activity.

President Trump understands that the path to ending human trafficking demands these initiatives and more.  But alone, our actions are not enough.  No single government can end the global scourge of human trafficking.  Governments, faith-based organizations, civil society, and survivors must work together.

Leveraging survivor insight and expertise is critical.  As Secretary Pompeo explained, survivors “set a courageous example of service for the United States, and for the world, by choosing to transform their harrowing experiences into powerful advocacy.”

In March, President Trump appointed nine survivors to the U.S. Advisory Council on Human Trafficking.  Together they represent a diverse range of backgrounds and experiences.  These survivors advise and make recommendations on federal anti-trafficking policies to the President’s Task Force.

Like the United States, the Holy See understands and appreciates the crucial part survivors play in the fight against this abhorrent evil.

America has a long history of working with the Vatican and Catholic lay organizations to implement international grant programs that assist trafficking survivors.

Grant programs provided by the U.S. Embassy to the Holy See have helped fund anti-trafficking training programs for Catholic nuns in thirty-six countries.

Recently, our embassy funded Talitha Kum, an international network of women religious, to establish a training course on anti-trafficking efforts.

This approach ensures that trauma experts, who understand the psychological and physical manifestations of human trafficking, work directly with law enforcement to support survivors.

When I visited the Human Smuggling and Trafficking Center in Washington, D.C., I learned about the joint efforts of the Federal Bureau of Investigation and Homeland Security Investigations to dismantle and disrupt trafficking networks.

During my visit I was briefed on Operation Safe Haven, which, to date, has led to the arrest of dozens of traffickers from Mexico and Central America.  Because of testimony provided by the victims, all of the arrested perpetrators were convicted on human trafficking charges.

Operation Cross Country is another example of the victim-centered approach.  This annual nationwide operation, conducted by the FBI’s Violent Crimes Against Children Unit, focuses on the trafficking of children and victim recovery.

The FBI has since expanded this operation to include coordination with law enforcement agencies in Canada, Cambodia, Thailand, Indonesia, Philippines, and the United Kingdom.

It is crucial that law enforcement continue to develop strong and enduring partnerships with nongovernmental and faith-based organizations that are on the front lines of survivor support.

In the United States, both Homeland Security Investigations and the FBI have established victim-assistance positions within major field offices.  These offices coordinate directly with victim service providers, such as Catholic Charities.  Over 300 nongovernmental and faith-based organizations are engaged in this endeavor.

Catholic shelters also play a crucial role in survivor care and recovery.  I had the privilege of meeting with survivors during my recent visit to Casa Rut in Caserta, Italy.  In the last two decades, hundreds of migrant women have found refuge and support at this shelter managed by Ursuline nuns.

The Catholic Church’s vast global reach makes it an ideal ally in the fight against human trafficking.  Its unique ability to develop trust, to work with local communities, and to affect change is unlike any other nation-state.

The United States Embassy to the Holy See will continue its crucial work with the Vatican in this endeavor.  Under President Trump’s leadership, the United States will not rest until the global evil of human trafficking is eradicated around the world.