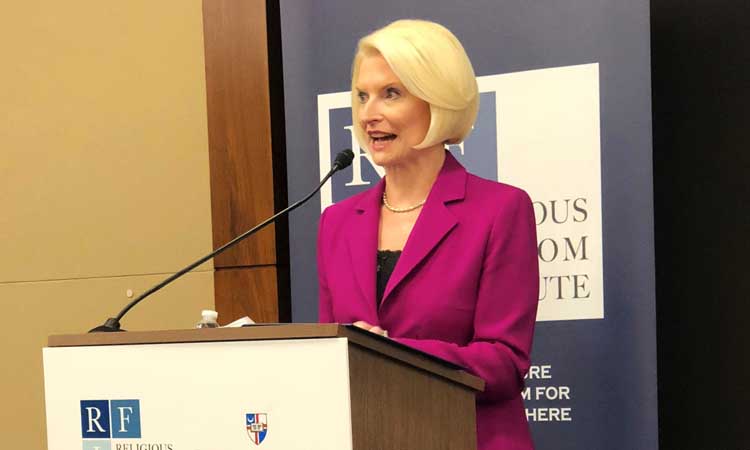 As Prepared for Delivery:

Thank you.  It’s an honor to be with you.

I’d like to thank Ambassador Rooney and Dr. Farr for inviting me to speak with you this afternoon.

I’d also like to commend the Religious Freedom Institute, and the Center for Religious Liberty of Catholic University, for everything they do to promote religious freedom.

Finally, I’d like to acknowledge His Excellency, Archbishop Paul Gallagher, the Vatican Secretary for Relations with States, who traveled from Rome to be with us today.

In June, the United States Embassy to the Holy See worked closely with the Vatican, Aid to the Church in Need, and the Community of Sant’Egidio to hold a symposium on defending and advancing religious freedom, as a lead-up to this week’s Ministerial to Advance Religious Freedom.

Promoting and securing religious freedom as a universal human right is a shared priority for the United States and the Holy See.  Together we continue to defend and support those persecuted for professing their faith.

The right to worship freely is often called America’s first freedom – a necessary component of U.S. foreign policy and our commitment to ensuring a more peaceful, prosperous, and secure world.

Safeguarding religious freedom is fundamental to the founding principles of the United States.  It’s part of who we are as a people and a nation.

America’s Founders understood religious freedom not as the state’s creation, but as an inalienable right from God.  Our commitment to this ideal remains steadfast.

President Trump has said that the United States will continue to be the paramount champion for religious freedom around the world.

This year marks the 20th anniversary of America’s International Religious Freedom Act, which made the promotion of religious freedom a U.S. foreign policy priority.  My husband, Newt, presided as Speaker of the House of Representatives when this law was passed in 1998.

As part of this historic act, the State Department annually delivers a report on International Religious Freedom to the United States Congress.  Recently, Secretary Pompeo released this year’s report.

The International Religious Freedom Report is a fact-based assessment of violations and abuses of religious freedom across 200 countries.  It serves as a crucial account of facts, not assumptions, of religious persecution around the world.

As this year’s report shows – repression, violence, and discrimination are daily realities for millions of believers in nearly every region of the world.  In many cases, their human rights are limited or restricted entirely.

Indeed, no religious community is immune from persecution.

What is most astonishing is that these examples represent just a small portion of religious persecution and repression around the world.

As these facts illustrate, it’s a dangerous time to be a person of faith.  We are at a critical moment.  We can and must do more.

All of us gathered here today understand that religious liberty and tolerance are bulwarks against the forces of extremism — the foundation of peace and security.

History has shown that governments and societies that champion religious liberty are safer, more prosperous, and secure.

But the United States and the Holy See alone cannot safeguard the right of religious freedom around the world.  Governments, civil society, faith groups, and individuals must work together to advance this cause.

Together we must confront and counter those who practice, enable, or export religious persecution or violent extremism.

Global crises require global solutions.  That understanding is the basis for this week’s Ministerial to Advance Religious Freedom.

This Ministerial is about action across governments, religious institutions, and civil society.  It’s about identifying concrete ways to restrain persecution and combat the forces of discrimination, marginalization, and violence.

Sadly, women and girls are uniquely vulnerable to these threats, from early or forced marriages to human trafficking to sexual and gender-based violence.

Governments and others often perpetrate or tolerate these abuses in order to intimidate or drive out disfavored religious groups.

To date, Boko Haram has kidnapped thousands of women and young girls. ISIS has kidnapped, enslaved, and raped countless Yazidi, Christian, and Muslim women and girls.

And Rohingya, including thousands of women and girls, have faced ethnic cleansing in Burma, where the military has perpetrated brutal killings, widespread rape and sexual assault, and burned hundreds of villages.

While these and other repulsive acts have in part been committed on the basis of religion, they in fact represent perversions of religious faith.  These abuses have encouraged a misconception that freedom of religion and women’s rights are incompatible – that increased religious freedom restricts equality and justice for women.

These unfair and misled characterizations could not be further from the truth. When religious freedom is protected, women’s rights are strengthened, and societies flourish.

Tomorrow at the Ministerial to Advance Religious Freedom, I will chair a panel examining the challenges women and girls face today, and the intersections between women’s rights and religious freedom.

Understanding the synergies that exist between women’s rights and religious freedom is essential to strengthening each right around the world.

Governments that respect and defend religious freedom often have greater protections and opportunities for women.

Women religious leaders have long fostered inter-faith dialogue and conflict resolution.  One of the best examples of this is Sister Maria Elena Berini, a 2018 International Woman of Courage nominated by the U.S. Embassy to the Holy See.  For the last four decades Sister Berini has served in war-torn communities in Africa – first in Chad and now in the Central African Republic.

For the last ten years, Sister Berini has dedicated herself to profound acts of charity at her mission in Bocaranga, demonstrating courage, grace, and compassion.

She is just one example of how women religious can be powerful advocates for reform within their communities and beyond.

It’s fitting that the Ministerial to Advance Religious Freedom coincides with the 70thanniversary of the Universal Declaration of Human Rights.  Ministerial participants will be asked to make a commitment to protect Article 18, which establishes the “right to freedom of thought, conscience and religion,” for all.

This Ministerial will seek new commitments from like-minded governments to structure a global fund to support the work of those who defend religious freedom.

We will also call on participating countries to host their own religious freedom conferences with government representatives, religious leaders, members of civil society, and others over the

next year and a half.

In closing, I’d like to again thank the Religious Freedom Institute, and the Center for Religious Liberty at Catholic University.

Gatherings such as this play a significant role as part of a comprehensive, international effort to urge coordinated action to defeat religious persecution and repression.

Our collective collaboration with the Holy See provides a unique opportunity to advance and preserve this fundamental human right around the world.