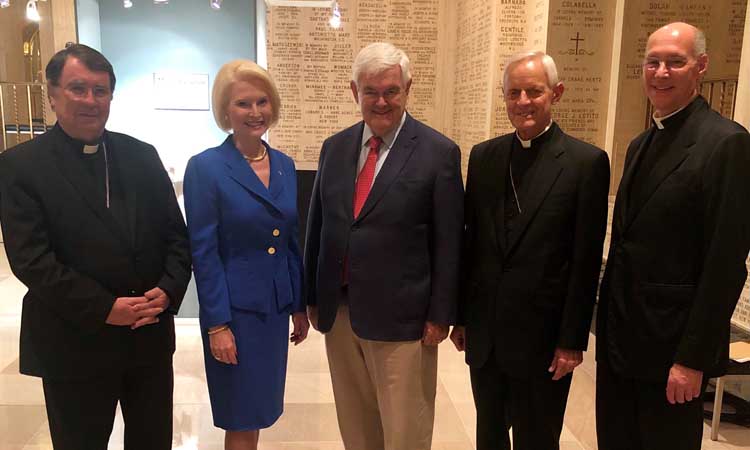 Remarks at a Reception and Exhibit at the Basilica of the National Shrine of the Immaculate Conception.

Good evening.  Before I begin, I’d like to say a few words about this solemn day of remembrance.

It’s been eighteen years since September 11, 2001.  But for countless families who lost loved ones, it feels like yesterday.  We will never forget the nearly 3,000 souls who perished on that fateful day.  Their memory will endure in our hearts.  May God continue to bless them, their families, and all who seek to live in peace and freedom.

It’s an honor to be here as we celebrate the 35th anniversary of diplomatic relations between the United States and the Holy See.

I’d like to thank Monsignor Walter Rossi for the opportunity to be here.  I’d also like to thank the Archbishop Emeritus of Washington, Cardinal Donald Wuerl, and the Apostolic Nuncio to the United States, Archbishop Christophe Pierre, for joining us tonight.

And finally, I’d like to thank Dr. Geraldine Rohling, the archivist of the Basilica, for curating this beautiful exhibit.

The Basilica of the National Shrine of the Immaculate Conception has a special place in my heart.  For twenty years, I had the honor and privilege of singing with the remarkable Choir of the Basilica, under the direction of my dear friend, Dr. Peter Latona.

Of course, as the U.S. Ambassador to the Holy See, I know that the Basilica of the National Shrine shares a place in the hearts of millions of Catholics in the United States and around the world.

Throughout its history, the National Shrine has played an important role in the life of the Catholic Church in the United States, and America’s relationship with the Holy See.

The Basilica has welcomed dignitaries and pilgrims from all walks of life.  Saint John Paul II, Pope Benedict XVI, and Pope Francis have all visited the National Shrine, which receives nearly one million guests each year.

It is no surprise that the National Shrine is affectionately known as America’s Catholic Church.  And this exhibit further highlights that fact.

I’m so honored that a few items in this exhibit were featured this summer in an exhibit at the U.S. Diplomacy Center, in Washington, D.C.  Both exhibits tell the story of one of the most consequential diplomatic partnerships in history.

As this exhibit illustrates, America’s friendship with the Holy See has grown over the centuries into a global partnership based on common values, mutual respect, and moral leadership.

Today, our governments are engaged in every part of the world – safeguarding human rights, defending religious freedom, mediating conflict, and providing humanitarian assistance.

In short, our partnership is a worldwide force for good – advancing peace, freedom, and human dignity around the world.

On behalf of the U.S. Embassy to the Holy See, I thank you all for being here as we honor and celebrate this great legacy.  Thank you.