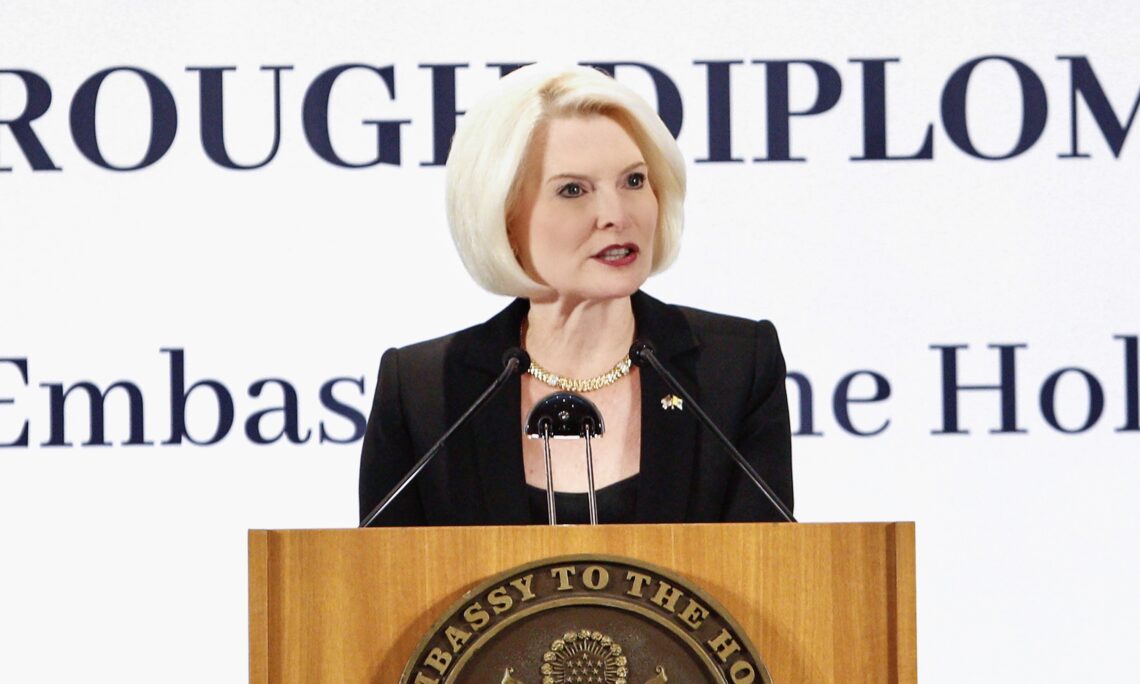 The U.S. Embassy to the Holy See is delighted to host today’s symposium on “Advancing and Defending International Religious Freedom through Diplomacy.”

I would also like to thank U.S. Ambassador-at-Large for International Religious Freedom,

Sam Brownback, and Acting Under Secretary for Civilian Security, Democracy and Human Rights, Nathan Sales, for participating in today’s symposium.

Finally, I want to thank all of you for being here, as well as those who are joining us virtually.

Promoting and securing the universal right of religious freedom is a shared priority for the United States and the Holy See.

Our collaboration with the Holy See provides an opportunity to protect and preserve this fundamental human right.

Secretary Pompeo’s participation in this symposium illustrates the importance the United States places on our diplomatic relationship with the Holy See, and our mutual defense of religious freedom.

It is an honor to have you here, Mr. Secretary.

There has never been a more critical time to advance and defend international religious freedom.

While the COVID-19 pandemic has fundamentally changed the rhythm of our lives, religious freedom continues to be under attack in almost every part of the world.

Some of the more recent examples are extremely troubling.

In Burma, the Rohingya and other ethnic minorities continue to face severe restrictions on freedom of movement and access to education and healthcare, based on their religion and ethnicity.

In Nicaragua, Christian persecution is on the rise as the government attacks the Catholic Church and desecrates religious spaces.

In Nigeria, Boko Haram continues to kill Muslims and Christians alike.  Thousands of innocent civilians have been killed by this terrorist organization.

In Saudi Arabia, where there is no law permitting religious freedom, Muslims and non-Muslims are persecuted for practicing their faith.

And in China, more than one million Uyghurs, ethnic Kazaks, and other Muslim minority groups are detained in camps by the Chinese Communist Party.

While the CCP wages its war on faith, the United States will continue to build partnerships with like-minded nations, which share our commitment to promote and secure religious freedom.

Upholding the right to religious freedom is not just morally necessary, it is a national security imperative.

Our advocacy for religious communities around the world helps to ensure the protection and prosperity of our citizens at home and abroad.

From the beginning of his presidency, President Trump has made international religious freedom a priority.

And on June 12, 2020, President Trump signed the first ever Executive Order instructing the

Under this order, the United States will allocate $50 million dollars per year for foreign aid programs that advance and defend religious freedom.

The U.S. Department of State, under Secretary Pompeo’s leadership, has been at the forefront of President Trump’s commitment to religious freedom.

In 2018 and 2019, Secretary Pompeo hosted Ministerials to Advance Religious Freedom in Washington, D.C.  We were delighted that Archbishop Gallagher was able to participate in both Ministerials – the largest human rights events ever held at the U.S. State Department.

Secretary Pompeo currently spearheads the International Religious Freedom Alliance, an international coalition of more than 30 countries that advocates for religious freedom.  We are honored to have Secretary Pompeo with us today and at the helm of the State Department.

Secretary Pompeo graduated first in his class at the U.S. Military Academy at West Point in 1986 and served with distinction in the United States Army.  After leaving active duty, he graduated from Harvard Law School, and was editor of the Harvard Law Review.

Prior to joining the Trump Administration, he served in the U.S. Congress, representing the Fourth Congressional District of Kansas.

In 2017, President Trump appointed him Director of the Central Intelligence Agency.  And in 2018, he was sworn in as the 70th U.S. Secretary of State.