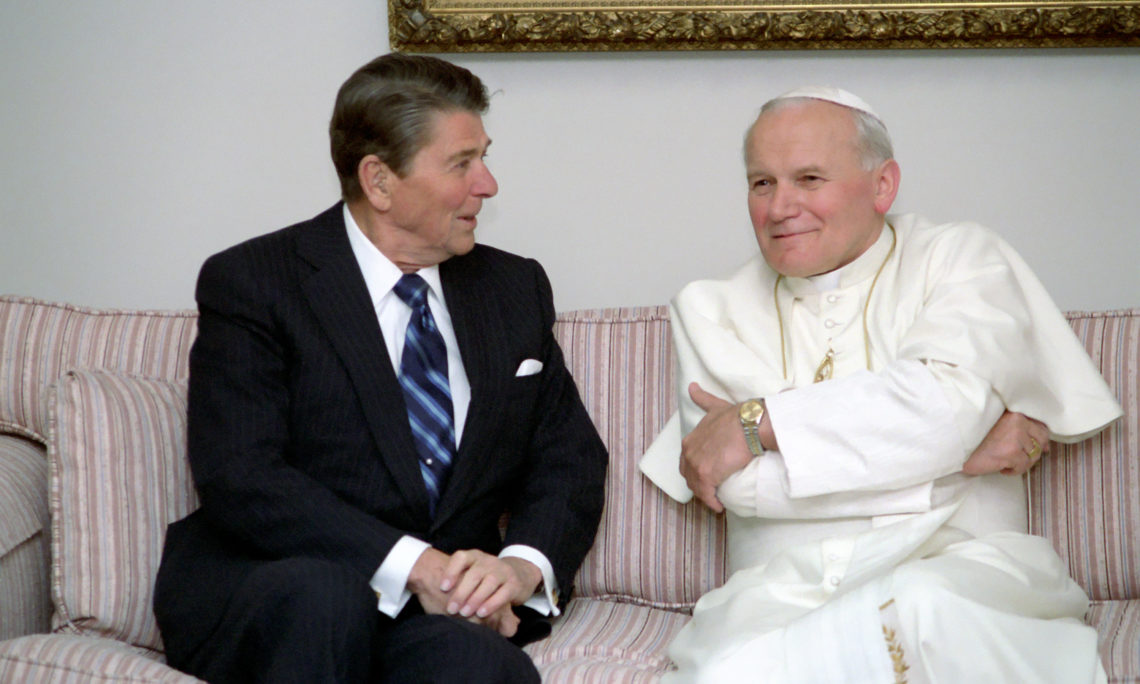 Remarks by Ambassador Gingrich
(as prepared for delivery)

Good afternoon.  It’s an honor to be here.

I’d like to thank Clark Judge, Monika Jablonska, the White House Writers Group, the Victims of Communism Memorial Foundation, the Polish National Foundation, and the Ronald Reagan Foundation and Institute for the opportunity to be with you today.

As the U.S. Ambassador to the Holy See, a lifelong Catholic, and a Polish-American, I’m delighted to share my thoughts with you on the historic partnership between President Ronald Reagan and Saint John Paul II.

As Ambassador, I’m often asked to explain the benefits of maintaining a U.S. mission to the Vatican.

After all, the territory of the Holy See, occupies less than one-quarter of a square mile.  So, why do we need an embassy?

The answer is rooted in history – sparked in June of 1979 during Pope John Paul II’s nine-day pilgrimage to Poland.  Millions of Poles, almost one-third of the nation, turned out to see the Holy Father, while the rest of the country and the world followed his trip on television and radio.

On the first day of his pilgrimage, the Polish pontiff declared, “There can be no just Europe without the independence of Poland marked on its map!”

It was a shot heard across the world.  And in California, by a future U.S. president.

Ronald Reagan was elated.  At the time he had a popular radio show and dedicated numerous broadcasts to the Pope’s historic trip.

In one of his broadcasts, Reagan summarized the Pope’s pilgrimage, saying, “It has been a long time since we’ve seen a leader of such courage and such uncompromising dedication to simple morality.”

A few months later in November of 1979, the former Governor of California announced his candidacy for President of the United States.

When the two leaders met in Vatican City in 1982, President Reagan asked Pope John Paul II — at what point would Eastern Europe be free from Soviet domination.

When the Pope responded, “In our lifetime,” the President grabbed his hand and stated fervently, “Let’s work together!”

When President Reagan returned to the United States, he instructed the State Department to work more closely with the Vatican and ordered a full-fledged embassy.  Two years later, in 1984, the United States Embassy to the Holy See was established.

For over a century before that time, America and the Holy See enjoyed a warm and respectful, although unofficial relationship.

That was forever changed in 1984.  This new relationship, as President Reagan said, “would exist to the benefit of peace-loving people, everywhere.”  And for nearly 35 years it has done just that.

Part of the embassy’s initial mandate was to work with the Holy See to counter the destructive and destabilizing behavior of the Soviet Union – to roll back the devastation of communism, which had already claimed tens of millions of lives.

The Polish Pope and the American President were under no delusions about the tough task ahead.

They had the full measure of the challenge before them.  Both had battled communists in their formative years in Kraków and Hollywood, respectively.

Karol Wojtyła was just 19 when Nazi Germany invaded his beloved homeland in 1939.  A few years later, before becoming the Bishop of Rome, he along with millions of his compatriots suffered under so-called “Soviet liberation,” which for decades caused more despair and destruction.

Around that same time, Ronald Reagan, was navigating his own challenges in Hollywood with communists and Stalinists in the Screen Actors Guild who wanted to use the movie industry for communist propaganda.

Reagan fought them from day one, noting later in his presidency that he had the scars on his back from fighting communists in Hollywood.

Through the leadership of President Reagan and Pope John Paul II, and the partnership between the United States and the Holy See, the Soviet Union was consigned to the “ash-heap of history” on December 25, 1991.

President Reagan forged not only a strong personal relationship with Pope John Paul II, but also an important diplomatic synergy between the United States and the Holy See.

This alliance continues today.  Although our governments are faced with different challenges  — they are equally great and perilous.

The necessity of our partnership did not end with the fall of the Berlin Wall.

Our work with the Holy See remains critical to responding to humanitarian crises, to safeguarding human rights, and to mediating and preventing conflict and violence.

And the reason is simple — the Vatican’s impact is real and respected around the world.

Today the Catholic Church is engaged on every continent, advancing human rights, alleviating suffering, and educating those most in need.

The Catholic Church is also the largest provider of health care services in the world, combating the spread of epidemics like HIV/AIDS, Ebola, and other diseases.

Its extensive network of service providers has access and credibility in the world’s most troubled areas.

The Holy See also has the second largest diplomatic community with 183 partners – second only to the United States.

The Vatican, through an unrivaled network of local contacts, plays an active role in countries where many governments have difficulty operating.

Across much of Africa, the Catholic Church serves on the frontlines as the only viable institution in society.

In the Democratic Republic of the Congo, the Vatican continues to play a critical role in supporting political dialogue and providing humanitarian relief.

In the Central African Republic, the Holy See is a crucial mediating force, bringing opposing parties together and achieving results.  Pope Francis’s visit to the country in 2015, brought Muslims and Christians together, to help pave the way for a peaceful and democratic presidential election.

The Vatican’s unique ability to develop trust, to work with local communities, and to affect change is unlike any other nation-state.  America benefits from this enormous reach and soft-power influence.

In short, the United States Embassy to the Holy See serves as a global engagement post.  We leverage the global impact and network of the Vatican – extending to more than 1.3 billion Catholics and millions of non-Catholics as well – to promote our common priorities in every region of the world.

This would not have been possible without the extraordinary vision and leadership of President Reagan and Saint John Paul II.  Their partnership paved the way.  Their example is ever-present.

Today the United States and the Holy See share a commitment to combating the global evil of human trafficking.

President Trump has pledged to bring the “full force and weight” of the U.S. government to this fight, and Pope Francis is equally passionate about ending this scourge.

The United States and the Holy See are also committed to protecting and promoting religious freedom in every part of the world.

We understand that when this fundamental human right is denied, instability, human rights abuses, and violent extremism flourish.

The U.S. Embassy to the Holy See works closely with the Vatican to protect and defend all those who are persecuted for professing their faith.  The Vatican can count on the United States to be a key ally in this endeavor.

The Holy See’s vast global influence makes it a critical partner in addressing a wide range of issues.  President Reagan and Saint John Paul II understood the significance of this relationship.

In honor of their memory, the United States Embassy to the Holy See will continue its crucial work with the Vatican, for the benefit of peace, freedom, and human dignity throughout the world.