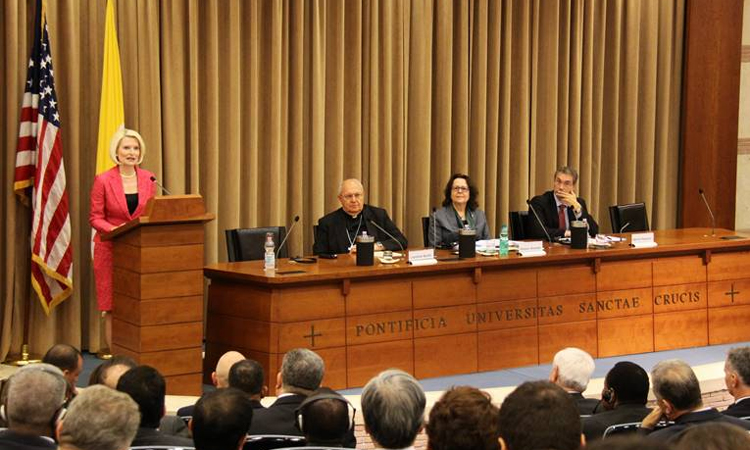 The U.S. Embassy to the Holy See hosted a symposium on Monday, June 25 on “Defending International Religious Freedom: Partnership and Action” at the Pontifical University of the Holy Cross.  U.S. Ambassador to the Holy See, Callista L. Gingrich, delivered the opening remarks and closing remarks were given by Vatican Secretary of State Cardinal Pietro Parolin.

Presented in partnership with Aid to the Church in Need and the Community of Sant’Egidio, the symposium sought to promote the universal right of religious freedom and raise awareness of religious persecution, particularly in the Middle East.

The panel of speakers included Vatican officials: Cardinal Leonardo Sandri, Prefect of the Congregation for Oriental Churches and Monsignor Khaled Akasheh, Secretary of the Pontifical Council for Interreligious Dialogue.  The leader of the Catholic Church in Pakistan, Cardinal-designate Joseph Coutts, Archbishop of Karachi also spoke along with the Embassy’s partners for this Symposium: Professor Marco Impagliazzo, President of the Community of Sant’Egidio, and Mark Von Riedemann, Director of Public Affairs at Aid to the Church in Need.

A highlight of the meeting were the remarks delivered by Yazidi Community Activist Salwa Khalaf Rasho, who was kidnapped by ISIS and held captive for eight months.

The Embassy was also pleased to welcome Victoria Alvarado, Senior Advisor for International Religious Freedom at the U.S. Department of State, and former Deputy Chief of Mission at the U.S. Embassy to the Holy See, as the moderator of the event.

“Defending International Religious Freedom: Partnership and Action” is a precursor to the first-ever “Ministerial to Advance Religious Freedom,” which will be convened by U.S. Secretary of State Mike Pompeo in Washington, D.C., July 25-26.