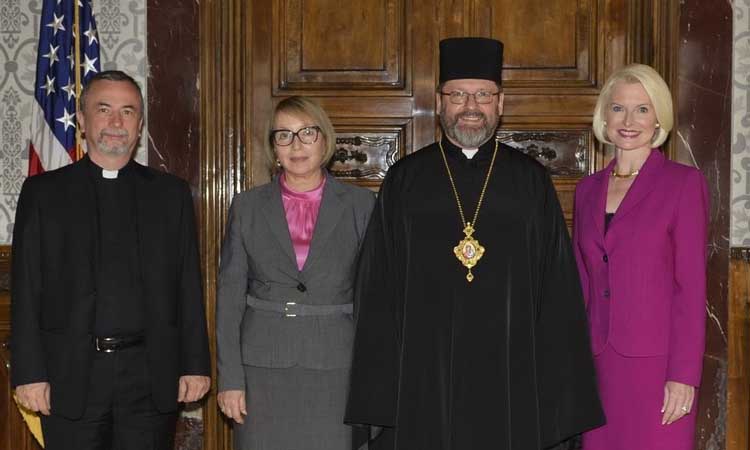 As Prepared For Delivery

Good morning.  Welcome to the United States Embassy to the Holy See – we’re delighted to have you here.

I’d like to thank His Beatitude Major Archbishop Shevchuk for traveling to Rome to share his thoughts with us on religious freedom in Ukraine.

I would also like to thank Their Excellencies Archbishop Tomasi and Archbishop Vasil for joining us today.  The United States and the Holy See share a commitment to protecting and defending religious freedom.  I look forward to working together on this important issue.

And finally, I’m happy to extend a warm welcome to my good friend Ambassador Izhevska from the Ukrainian Embassy to the Holy See.  I look forward to your concluding remarks.

Three weeks ago in Washington, Secretary of State Pompeo released this year’s International Religious Freedom Report.  This report, delivered annually to our Congress, is a fact-based assessment of violations and abuses of religious freedom across 200 countries.  It serves as a crucial resource, of facts, not assumptions, detailing religious persecution and discrimination around the world.

The report’s findings are stark.  Today, religious freedom is increasingly under threat.  Persecution, violence, and discrimination are daily realities for millions of believers in nearly every region of the world.

The United States is committed to addressing this crisis.  Freedom of religion is America’s first freedom, codified in the First Amendment to our founding Constitution.  Defending this right is part of who we are as a nation.

To underscore this commitment, Secretary Pompeo will convene the first-ever Ministerial on Advancing Religious Freedom July 25-26 in Washington D.C.  This Ministerial will identify concrete ways to restrain persecution and ensure greater religious freedom for all.

I’m pleased to announce that our Embassy, in partnership with Aid to the Church in Need and the Community of Sant’Edigio, will host a symposium on defending international religious freedom on Monday, June 25th at the Pontifical University of Santa Croce.  We hope to see all of you there.

No religious community is immune from repression.  And this unfortunate reality is most evident in the Russian-occupied regions of Crimea and eastern Ukraine.

The facts are truly astonishing.  Today, Russia ranks among the worst violators of religious freedom and human rights.  There is no sign that its persecution of religious minorities and foreign missionaries is coming to an end.  And what is perhaps most troubling is that this repression is not limited to its own borders.

It has been four years since Russia invaded eastern Ukraine, and occupied and attempted to annex Crimea.  These unjust actions, launched under the pretense of “defending Russian-speaking people,” have in reality been disastrous for the people living in these regions.

May was the bloodiest month this year for Ukrainian soldiers defending their country against Russian aggression.  Ten soldiers were killed and 91 others were wounded.  The United States again calls on Russia to withdraw its forces from Donbas.

Religious freedom also remains heavily constricted in areas of Ukraine under Russian occupation and control.  The United States is deeply concerned by the deterioration of human rights and religious freedom in occupied Crimea and eastern Ukraine.  Ukrainian citizens living under Russian control – whether they are Catholics, Protestants, Jews, Crimean Tatars, Jehovah’s Witnesses, or Orthodox Ukrainians – are subject to beating, detention, and kidnapping.

This persecution is most vivid in the Crimean Peninsula, where Russian security forces routinely raid, detain, deport, and forcibly recruit members of the Crimean Tatar community and others who dare to remind Russia that Crimea is Ukraine.

In eastern Ukraine, Russia-led forces detain and imprison religious leaders and seize property belonging to minority religious groups.  Ukrainian citizens must be afforded the fundamental right to worship freely and in accordance with their conscience.

Of course, Russia’s aggression in Ukraine is not limited to religious persecution.

For example, Russia also uses its energy resources to exert pressure on Ukraine.  Moscow’s Nord Stream 2 pipeline will make the eastern flank of NATO more vulnerable to Russian pressure, reduce Ukraine’s security as a transit nation, render it more susceptible to Russian aggression, and make Europe more dependent on Russian monopolies.  Many European states, as well as the European Union, share our concern and are working with us on stopping this project.

Despite these various acts of aggression, America’s support for Ukraine remains absolute.  Ukraine is a part of Europe and the West, both by virtue of history and by the choice of its people.  We are committed to supporting Ukraine’s territorial integrity and achieving a Ukraine that is stable, democratic, prosperous, and free.

The United States will continue to utilize diplomacy, sanctions, and security assistance to ensure that Russia pays a price for its occupation of Crimea, its ongoing aggression in Donbas, and its repression of religious freedom.

We are committed to working with NATO, the European Union, and Ukraine to strengthen Ukrainian resilience in the face of Russian aggression.  The United States stands ready to help Ukraine establish the democratic institutions necessary to support the needs of the Ukrainian people.