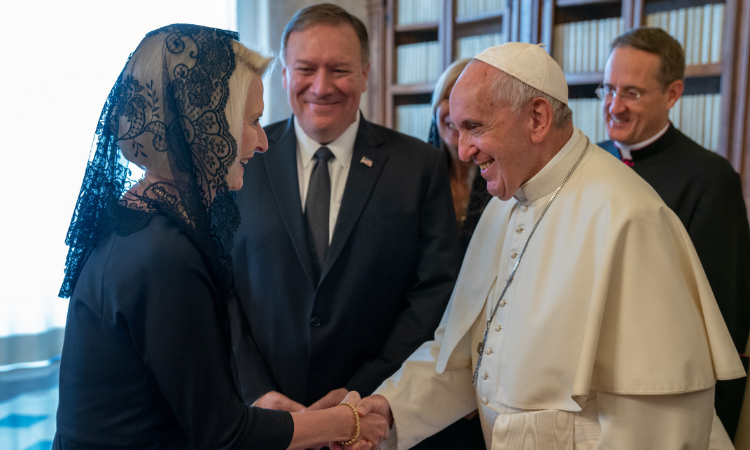 Ambassador Gingrich: 2019 was a Banner Year in U.S.-Holy See Relations

Published on Breitbart.com on December 31, 2019

This year marked the 35th anniversary of formal diplomatic relations between the United States and the Holy See.

America’s official diplomatic partnership with the Holy See was established by President Ronald Reagan and Pope John Paul II in January 1984 – on the basis of a shared desire to defeat the forces of Soviet Communism.

When Secretary Pompeo arrived in Vatican City in October to meet with Pope Francis, he added another chapter to the story of America’s ties to the Vatican.

In so many ways, 2019 has been a banner year in the history of our relationship. We marked our anniversary with programs on religious freedom, human trafficking, food security, artificial intelligence, and the work of women religious on the frontlines. We hosted concerts and exhibitions in the Vatican and in Washington, D.C. to highlight our cultural ties.

And, on October 2 in Vatican City, Secretary Pompeo and Archbishop Paul Gallagher, the Vatican’s foreign minister, co-hosted a landmark U.S.-Holy See symposium on how governments can partner with faith-based organizations to promote human dignity.

Beyond the many programs and special events we organized throughout the year, we strengthened our diplomatic engagement with the Holy See on some of our most critical priorities – advancing religious freedom and interfaith dialogue, combatting human trafficking, delivering humanitarian assistance, mediating disagreements, and preventing conflict and violence.

This was most evident in Washington, D.C. in July during Secretary Pompeo’s Ministerial to Advance Religious Freedom. Archbishop Gallagher and Archbishop Christophe Pierre, the Papal Nuncio to the United States, participated in our Ministerial and met with the Secretary of State, the National Security Advisor, the USAID Administrator, and others, further illustrating the importance of this diplomatic relationship.

As Archbishop Gallagher said in Washington, the U.S.-Holy See partnership is “strong and solid,” and the Holy See “cherishes” this relationship. I couldn’t agree more.

The fact is, a strong U.S.-Holy See partnership is good for America – and the world.

Today, religious persecution and anti-Semitism are on the rise. More than 80 percent of the world’s population live in environments with high or severe restrictions on religious freedom. Human traffickers continue to prey on millions of victims worldwide, including in the United States. The Maduro regime continues to repress and starve the Venezuelan people. Iran’s theocratic rulers spread violent and malign influence that threatens international peace and security. And the Chinese Communist Party continues its policy of brutal detention and systematic repression of Uighurs and members of other ethnic and religious minority groups.

A strong U.S.-Holy See partnership is necessary to face and overcome these challenges, from the concentration camps in Xinjiang to the streets of Caracas and everywhere in between.

Thirty-five years ago, President Reagan and Pope John Paul II created a partnership that advanced peace, freedom, and human dignity. As we look ahead to 2020, the U.S. Embassy to the Holy See will continue to honor and uphold this great legacy.