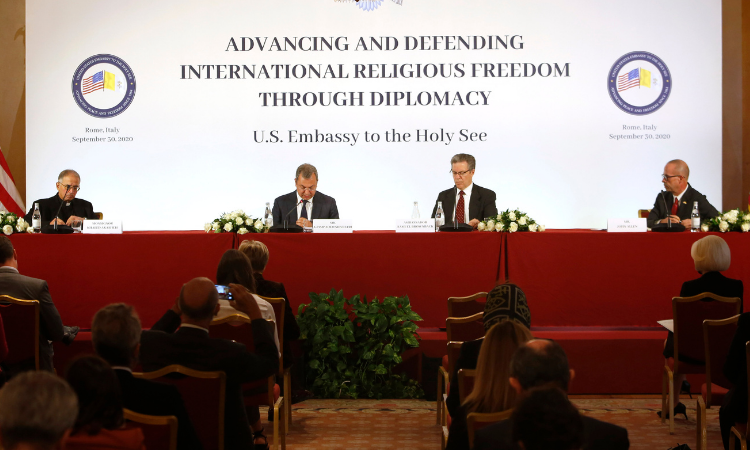 Thank you very much John, I appreciate that greatly.

And thank you all for being here, and in person.  It is so good to see a live audience. I’ve been speaking on Zoom meetings and virtual meetings for so many months now. I want to hug all of you. I know I can’t do that, so I won’t. I’ve got a stopwatch here that I’m going to get started so that I run on time for John, because I want to do that right.

I want to start off with a bold statement and back it up with diplomatic suggestions.

So, what are we doing? You’ve heard mentioned several of these activities going on.

One of them I want to put right at the outset is the Abrahamic Faiths Initiative that we launched here in Rome in January between Christians, Muslims, and Jews. Top theologians getting together and saying, “Our faith does not support the use of violence in promoting the faith.” It does not support the use of violence in supporting the faith. Now I’m not talking about Just War doctrines and things like that, I’m talking about the promotion of the faith, no violence. And these top theologians agreed to it, and we’re seeing more of it. This is putting legs under the Human Fraternity Document — the Pope and the head of al-Azhar put together two years ago. That’s a key one.

The International Religious Freedom or Belief Alliance. This is an Alliance of 31 nations promoting and pushing religious freedom as a group, which we invite the Vatican to participate in, in anyway they see fit, to be a part of this Alliance.

Rehman Chishti talked about how he was vice chairman of this group. This is a group that is pushing aggressively for religious freedom for everybody, everywhere, all the time.

One of the key things we’ve done in the COVID crisis is saying, if you’re in prison because you’re a prisoner of conscience, a prisoner based on your faith, for practicing your faith peacefully, you shouldn’t be in prison. You’re being subjected to the COVID virus in prison, and I’m sure you shouldn’t be there in the first place. But please, governments, let these people go. They shouldn’t be in prison in the first place and now you’re subjecting them to poor health and more problems. We’ve seen several hundred let free during the COVID crisis. Our hope and prayer, and our push as an Alliance, is that they will not be put back in prison afterwards.

We’re also advocating that the Archbishop of Belarus be allowed back into the country. And advocating that religious sites be protected in conflict zones. This is a key Alliance initiative that is moving forward.

There will be a Ministerial on religious freedom; the third of the Ministerials to take place, in Poland on November 16th and 17th. This will be done virtually this year, for obvious reasons, but I invite people to participate in this. Secretary Pompeo hosted the first two, the third one will be hosted by Poland. I hope people can participate in this. This is a chance for the world community to gather, and to push on the topic of religious freedom, various aspects of it, and there are a lot of different aspects of it. I invite people to participate in that.

Finally, I want to put forward religious freedom roundtables. These are being started in countries around the world, with 30 of them so far. Where religious adherents of all faiths or no faith at all get together around a table and stand up for each other’s religious freedom. This is not about establishing a common theology. It is about establishing a common human right. And that is the right to freedom of conscience, which is at the heart of us getting to peace in the world. There is a big movement of this going on around the world, as far as religious freedom. I think what’s happening is God is hearing the prayers of those, crying from the most desolate places of prisons around the world, that just need to be free to practice their faith. That’s why we’re here and that’s why we’re responding to this.

This “iron curtain” of religious freedom must come down, and it’s our generation and our time to do it.