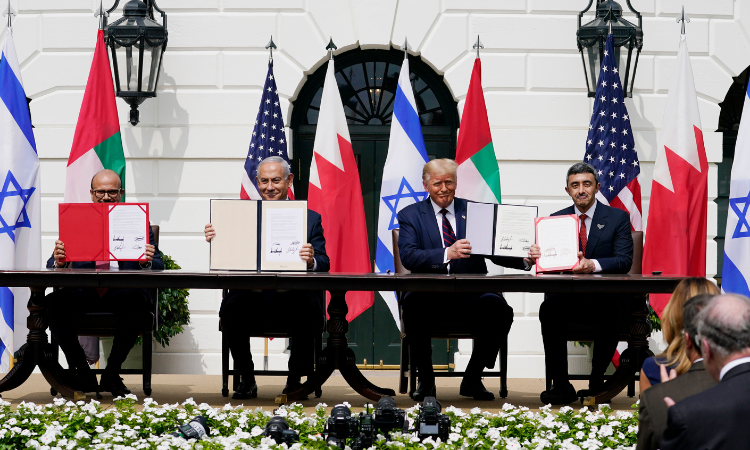 His Majesty King Hamad bin Isa bin Salman al-Khalifa and Prime Minister Benjamin Netanyahu have agreed to open an era of friendship and cooperation in pursuit of a Middle East region that is stable, secure and prosperous for the benefit of all States and peoples in the region. In this spirit Prime Minister Netanyahu of Israel and Foreign Minister Mr. Abdullatif Al Zayani met in Washington today, at the invitation of President Donald J. Trump of the United States of America, to endorse the principles of the Abraham Accords and to commence a new chapter of peace. This diplomatic breakthrough was facilitated by the Abraham Accords initiative of President Donald J. Trump. It reflects the successful perseverance of the United States’ efforts to promote peace and stability in the Middle East. The Kingdom of Bahrain and the State of Israel trust that this development will help lead to a future in which all peoples and all faiths can live together in the spirit of cooperation and enjoy peace and prosperity where states focus on shared interests and building a better future.

The parties discussed their shared commitment to advancing peace and security in the Middle East stressing the importance of embracing the vision of the Abraham Accords, widening the circle of peace; recognizing each State’s right to sovereignty and to live in peace and security, and continuing the efforts to achieve a just, comprehensive, and enduring resolution of the Israeli- Palestinian conflict.

In their meeting, Prime Minister Benjamin Netanyahu and Foreign Minister Abdullatif Al Zayani agreed to establish full diplomatic relations, to promote lasting security, to eschew threats and the use of force, as well as advance coexistence and a culture of peace. In this spirit, they have today approved a series of steps initiating this new chapter in their relations. The Kingdom of Bahrain and the State of Israel have agreed to seek agreements in the coming weeks regarding investment, tourism, direct flights, security, telecommunications, technology, energy, healthcare, culture, the environment, and other areas of mutual benefit, as well as reaching agreement on the reciprocal opening of embassies.

The Kingdom of Bahrain and the State of Israel view this moment as a historic opportunity and recognize their responsibility to pursue a more secure and prosperous future for generations to come in their respective countries and in the region.

The two countries jointly express their profound thanks and appreciation to President Donald J. Trump for his untiring efforts and unique and pragmatic approach to further the cause of peace, justice and prosperity for all the peoples of the region. In recognition of this appreciation, the two countries have asked President Donald J. Trump to sign this document as a witness to their shared resolve and as the host of their historic meeting.