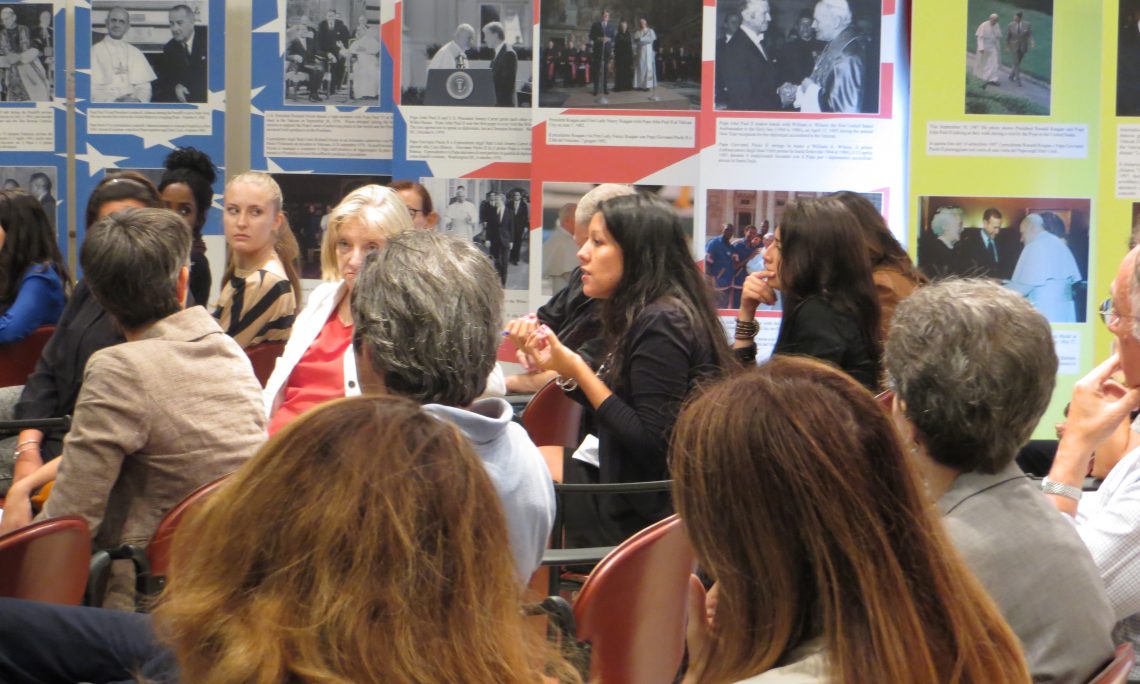 Good afternoon.  I’m pleased to be here today to launch our Embassy’s photo exhibit for the 30th anniversary of U.S.-Holy See relations.  I would like to thank Executive Vice President of AUR, Dr. Andrew Thompson, for his partnership with us on this event, and for hosting our exhibit so the students can learn more about the history of diplomatic relations between the United States and the Holy See.  I’d also like to thank Maurizia Garzia and Professor Aldo Patania for their assistance in making this happen.

I’m a relative newcomer to our Embassy, and I’m incredibly honored to be here at a time when the U.S. and Holy See are working together on such important and timely issues.  Whether it is countering the narratives of violent extremism from groups like ISIL, working to end modern slavery and human trafficking, actively confronting hunger and diseases like Ebola – the Holy See and the United States are making efforts to defend religious freedom, dignity, and human rights around the globe.  These are topics very dear to U.S. citizens in general, and personally these are topics I’ve dedicated much of my professional and academic life studying.

This year our embassy celebrates its 30th anniversary.  On January 10, 1984, U.S. President Ronald Reagan and Pope John Paul II agreed to the establishment of formal diplomatic relations.  The United States established an embassy to the Holy See on April 9, 1984, when William A. Wilson presented his credentials to Pope John Paul II, elevating his position from Personal Representative of the President to U.S. Ambassador to the Holy See.

But in fact the United States has engaged with the Vatican at various levels since the very beginning of our republic.

In an historic moment on January 4, 1919, U.S. President Woodrow Wilson met with Pope Benedict XV while Wilson was on a tour of Europe following World War I.  This was the first meeting between a U.S. president and a pope.  This historic meeting highlighted a key common global interest in our bilateral relationship – the promotion of peace and human rights.  On December 6, 1959, President Dwight Eisenhower met with Pope John XXIII.  Since then every sitting American president has met with the pope.  Pope John Paul II became the first pope to visit the White House in October 1979 when he visited President Jimmy Carter.

The more recent history of our relations with the Holy See is told in the photo exhibit we are launching here today.  It is a story of engagement and cooperation over the last century on a wide range of important global issues.

The importance of the relationship was underscored recently by President Obama and U.S. Secretary of State John Kerry’s visits to the Vatican this year.  President Obama’s first meeting with Pope Francis was lengthy (almost an hour!), and focused on issues of peace and global inequality, and the need to help those less fortunate.  The fact that these meetings occurred during our 30th anniversary year of formal diplomatic relations demonstrates further the importance and endurance of our relationship with the Vatican as we continue to partner on global issues to help promote peace and solve conflicts.

We hope you enjoy the photo exhibit and we thank you for joining us in celebrating both our 30th anniversary as an embassy and the rich history between the United States and the Holy See.